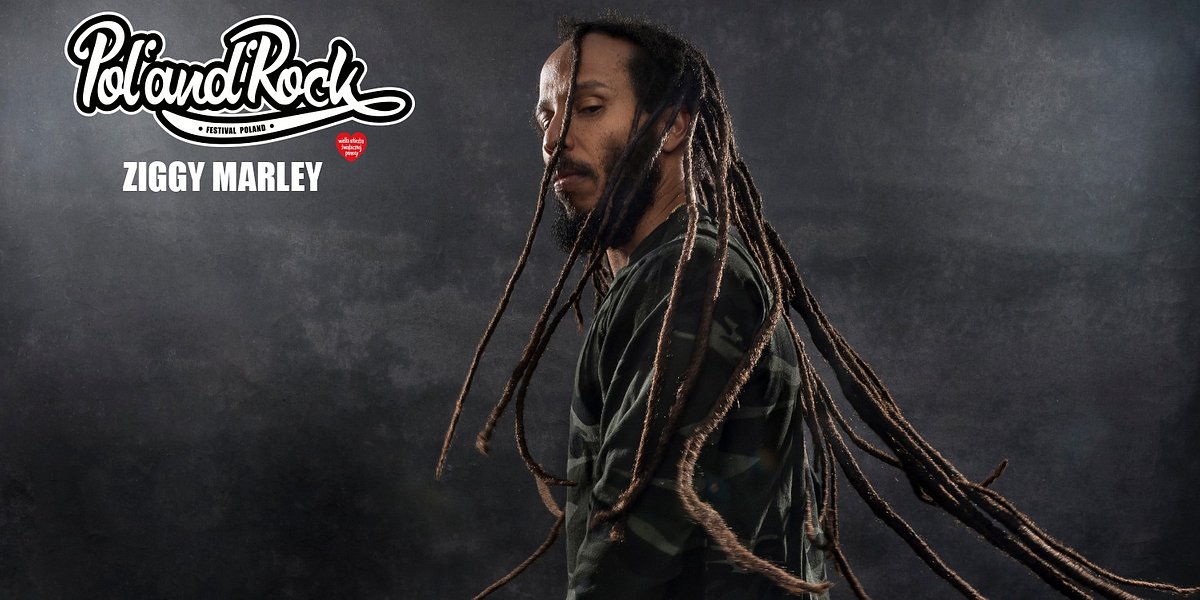 Ziggy Marley to perform in Poland for the first time

Music supplies the soundtrack to the real revolution. Ziggy Marley is the first star to be announced to play at the anniversary Pol'and'Rock Festival which will see its 25th edition in August 2019!

The strains of guitar chords, drum beats, and vocal crescendos remain indistinguishable from those of the winds of change. Recognizing this truth, GRAMMY® and EMMY® Award-winning singer, songwriter, producer, humanitarian and visionary Ziggy Marley infuses the spirit of revolution into his seventh full-length solo offering, Rebellion Rises

Throughout the record, he encourages the people to stand in solidarity together. “Every song speaks to the rebellion, but the word ‘love’ is also in a lot of them,” Marley affirms. “Love is the foundation. This entire album is a message to the best side of humanity. It’s a rallying cry and encouragement for us to stand up. When we do, our actions will be felt. We will change the direction of this world instead of what we see happening today. We will make it better, but we have to do more. We have to take a stand. We have to get more active. No matter what the fake leaders say, we’re going to love one another first.” The message resounds throughout every fiber of the track listing from “See Dem Fake Leaders” to the unbreakable grooves of “Rebellion Rises” and “Circle of Peace” the wailing guitars on “World Revolution” and “The Storm is coming” to the provocative living and breathing lyrics on “I Am A Human”. Recorded primarily at his Los Angeles home studio during 2017, Ziggy threads together a cohesive vision steeped in reggae tradition, yet markedly progressive and forward-thinking.
To see this content properly accept cookies.
If anybody can incite change through song, it’s Ziggy. In fact, it’s in his blood. For as much as he upholds a family tradition that began with his father Bob Marley, he’s also blazed a trail of his own. After eight records with The Melody Makers and three GRAMMY® Awards, he kicked off a legendary solo career in 2003 with Dragonfly. He impressively garnered the GRAMMY® Award for ‘Best Reggae Album in 2006 (Love Is My Religion), 2013 (In Concert), 2014 (Fly Rasta) and 2016 for the self-titled Ziggy Marley – which marked his fourth consecutive debut at #1 on the Billboard Top Reggae Album Chart. Building a presence in the world of children’s entertainment, Marley’s first children’s album (Family Time) received the 2009 GRAMMY® for “Best Children’s Album.” He also took home a Daytime EMMY® Award for “I Love You Too,” which shares its title with his children’s book. To date, Marley has taken home a total of 8 GRAMMY® Awards.Tapping into his expansive creativity, he created the graphic novel, MARIJUANAMAN, and launched Ziggy Marley Organics—an innovator in GMO-free coconut oils and hemp seed snacks. As an extension of his passion for health and sustainable living, Marley published the Ziggy Marley & Family Cookbook in 2016.So, what does revolution sound like in 2018 and beyond?  It sounds like Rebellion Rises.

I hope people enjoy it he leaves off. “When you enjoy it, everything else will come after. The majority of people are good on earth. I know this. We are more powerful than any political, religious, racist ideology. That’s what this is. I want this album to help be that motivating voice for the majority of people on earth.

Performing at the festival for the 8th time, Acid Drinkers will be giving our international audiences an insight into the history of thrash in Poland.

We have a real treat for all fans of the Swedish brand fo metal music! Avatar is an avant-garde metal band established in Gothenburg in 2001. The band is known for their spectacular live shows and captivating stage persona which sets them apart in the highly competitive ...

A band unlike any other at a festival which breaks with all conventions seems like a match made in rock'n'roll heaven. It seems poetically fitting that the British alternative quartet will celebrate its 25th anniversary on the Main Stage of Pol'and'Rock Festival.

The biggest non-commercial festival in Europe is three days of music and culture extravaganza.