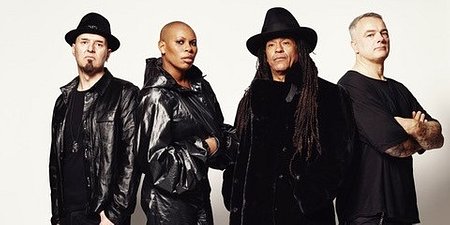 25 years on Skunk Anansie are more potent and more essential than they’ve ever been.

A band unlike any other at a festival which breaks with all conventions seems like a match made in rock'n'roll heaven. It seems poetically fitting that the British alternative quartet will celebrate its 25th anniversary on the Main Stage of Pol'and'Rock Festival.
Skunk Anansie were born radical and have stayed that way ever since. When the band emerged in 1994, they sounded and looked like nothing that had come before them - their DNA a glorious mix of race, gender, sexuality, cultural and musical influences.
While Skunk racked up Top 40 singles and Top 10 albums - 1995’s Paranoid & Sunburnt, 1996’s Stoosh and 1999’s Post-Orgasmic Chill - their formidable reputation was amplified by their fearsome live presence. The highlights came thick and fast and in 1997 they became the first international multi-racial band to tour South Africa, selling out 3 arena shows, returning in 1998 to perform at a concert held to mark Nelson Mandela’s 80th birthday. Their meteoric rise reached a new height in 1999 when the band headlined the Pyramid Stage at Glastonbury festival.
To see this content properly accept cookies.
Few bands inhabit the stage like Skunk Anansie so it’s fitting that the band have opted to mark their forthcoming 25th anniversary with 25 At 25, a live album that brings together the greatest songs from the six studio albums they’ve made. Including hit singles such as politically-charged ‘Little Baby Swastika’ and ‘Selling Jesus, the emotionally vulnerable ‘Weak’ and ‘Hedonism (Just Because You Feel Good)’, and the anthemic ‘I Can Dream’ and ‘Charlie Big Potato’, 25 At 25 was recorded at shows across Europe. Twenty-five years after they exploded from the backrooms of London, Skunk Anansie are more potent and essential than ever. 25 At 25 is a living, breathing, an in-your-face document that there is and always will be only one Skunk Anansie.
Few bands are as brilliant live as Skunk Anansie

Few bands are as brilliant live as Skunk Anansie

You Me At Six billed to play at Pol'and'Rock Festival

Fresh off the release of their fifth studio album, they will be taking the Main Stage at the Polish summer music festival.

We have a real treat for all fans of the Swedish brand fo metal music! Avatar is an avant-garde metal band established in Gothenburg in 2001. The band is known for their spectacular live shows and captivating stage persona which sets them apart in the highly competitive ...

Are you ready to join Jesterheads?

The band creates socially aware music and they bravely stand in opposition to the evil corporates which aim to silence any form of dissent. Their raw energy and energy seems to be the perfect fit for the Second Stage of the Most Beautiful Festival in the World.