Three decades into their celebrated career, thrash metal legends, Death Angel, remain as hungry as ever. The Bay Area thrash quintet will be taking the Second Stage at Pol’and’Rock Festival this summer.

Death Angel was established in 1982 in the San Francisco Bay Area. In 1983 the band, which initially composed of teen cousins: guitarist Rob Cavestany, Dennis Pepa on bass, Andy Galeon on drums, released their first demo “Heavy Metal Insanity”. Following a string of successful gigs in clubs and even once during high-school lunch break, Death Angel released their debut album, “The Ultra-Violence” in 1987. The band began touring nationally and internationally, sharing the stage with the likes of Exodus, Destruction, and Voivod, making their brand of highly technical and powerful thrash known around the world. Released just a year after their debut, “Frolic Through The Park” album landed on Loudwire’s list of “Top Ten Thrash Albums NOT Released by The Big 4”.
Even though band all band members were under 20 years of age when their first album was released, the group was able to carve out a niche in the booming metal scene of the Bay Area of the time, becoming one of the leading acts of the second wave of the thrash metal music. Often referred to as one of the members of the big 8 of thrash, alongside Metalica, Megadeath, Slayer, Testament, Anthrax, Exodus, and Overkill. The band’s technical skill, passion, and high-voltage live shows helped to established their leading position on the thrash metal scene. 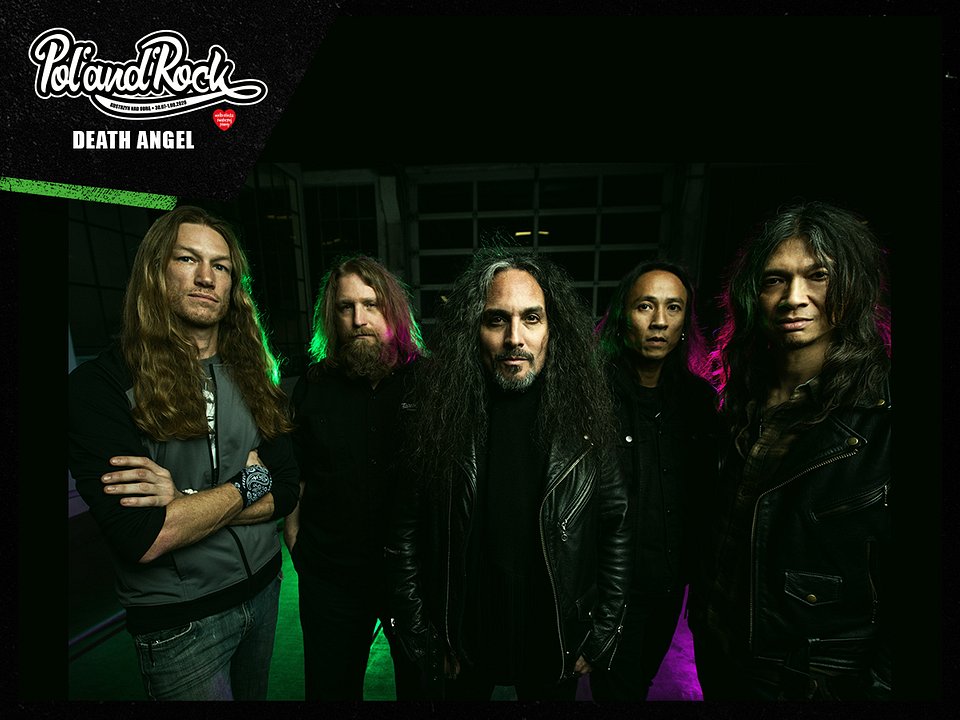 Death Angel went on to released nine studio and two live albums. The group’s most recent offering, “Humanicide” came in 2019 - almost ten years after their reunion at Chuck Billy’s benefit show in 2001. “Humanicide” proves that the band is in a top creative form, as its title track was nominated for a Grammy Award in “Best Metal Performance” category. Release of the album coincided with American and European tours, where Death Angel played alongside Overkill, Anthrax, Arch Enemy, and Testament (the former two bands performed at Pol’and’Rock in 2018 and 2019 respectively) and took to the sea at the first Megadeath Megacruise in October 2019.
Having received their latest LP, we could not pass on showcasing their music at Pol’and’Rock Festival in 2020!
Line-up: Mark Osegueda - vocals; Rob Cavestany - guitars; Ted Aguilar - guitars; Damien Sisson - bass; Will Carroll - drum

The energetic folk-inspired band from St. Gallen in Switzerland is going to take the Second Stage audience straight on a pub crawl across the Green Island!

The Rumjacks Returns to the Most Beautiful Festival in the World

The Australian band is making its return to the Most Beautiful Festival in the World, this time showcasing their trademark fusion of Celtic folk, solid punk rock and hard rock at the Second Stage of Pol' and'Rock Festival.

The festival, which has been moved to the realm of the Internet, will feature live performances from 30 top Polish acts. The artists will perform at the studio in Warsaw, and their shows will be streamed live on YouTube, Facebook, and Twitch.