The Romanian folk/metal sensation submitted their CD to play at the Most Beautiful Festival in the World. Dirty Shirt will take the Second Stage at Pol'and'Rock Festival this summer.

Dirty Shirt shows what can happen when you blend the power of heavy metal with the energy and passion of Slavic folk and the richness of inspiration derived from world music. The band, which is regarded as one of the most original and successful rock groups in Eastern Europe is coming to Pol’and’Rock Festival Second Stage this summer!
Established in 1995 the northern part of Transylvania, in Romania, the band went on to release six albums and a DVD chronicling their acclaimed FolkCore DeTour from 2018. In 2014, Dirty Shirt took second place in the international final of Wacken Metal Battle, and their unique sound went global. The band is often described as a crossover folklore metal band, but there is much more to Dirty Shirt’s sound. The basis of their sound is the raw power of modern hardcore metal, which is then spiced up with traditional, lively Slavic music and heavily influenced by the eclectic nature of world music, blending elements of country, reggae, tribal with the energy of electro and industrial and smooth groove of funk. Their tracks are festive, catchy, aggressive, and powerful at the same time, appealing to a wide range of listeners. 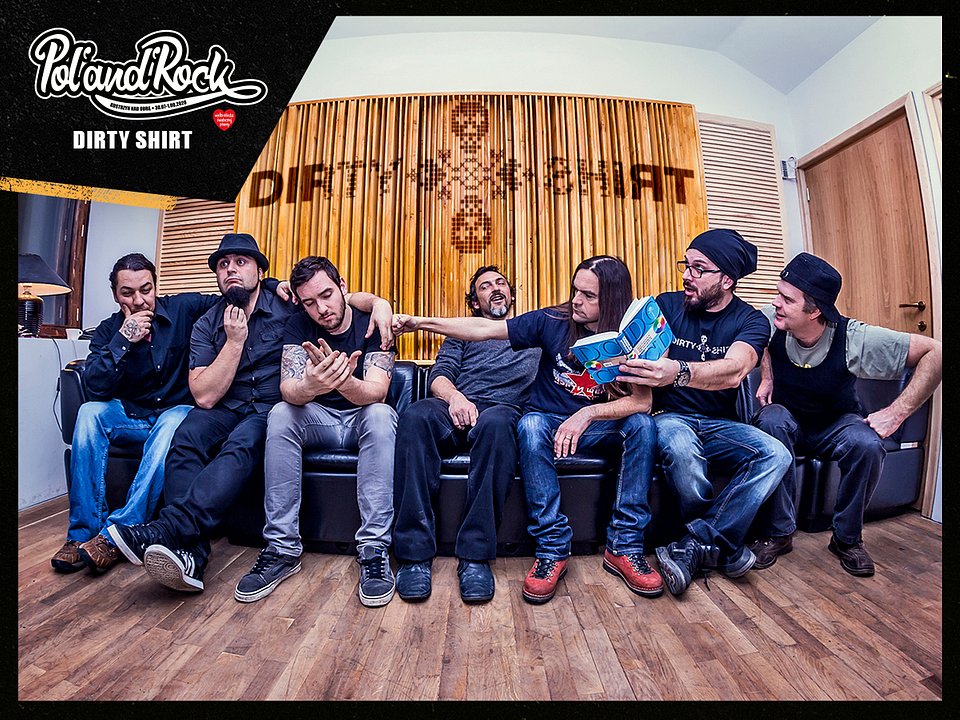 Dirty Shirt is lead by two vocalists, each of them with distinctive style: Dan „Rini” Crăciun, who is often clad in a tie, offers some melodic folk singing and Robert Rusz contributes heavy metal screaming. Fiddles and other traditional folk instruments complement heavy percussion solos and blistering guitar solos exceptionally well. In the standard configuration, the band is formed by 8 musicians performing on stage. Still, one of the recent projects saw Dirty Shirt join forces with a prestigious traditional folk orchestra - Ansamblul Folcloric National Transilvania, taking the number of musicians to 25. The stunning juxtaposition of heavy metal and traditional folk orchestra resulted in a highly successful tour. It inspired Dirty Shirt to explore cooperation with traditional folk bands further in their FolkCore DeTour project.
The band’s most recent LP, “Letchology”, was released in 2019, and the band toured extensively to promote the new album, performing across Europe, and making their return to Wacken in the summer. The group is at their ultimate best when establishing a connection with the audience - we know that they will give a stunning show at the Most Beautiful Festival in the World.
Dirty Shirt line-up: Dan „Rini” Crǎciun - vocal;Robert Rusz - vocal; Mihai Tivadar - guitar, keyboards; Cristi Bălănean - guitar; Pal Novelli - bass guitar; Vlad „X” Țoca - drums; Dan Petean - guitar; Cosmin Nechita (Vulpea) - violin

The Great Orchestra of Christmas Charity has been raising money to buy medical equipment for children's medicine for almost 30 years. We have raised over PLN 1.5 billion and donated over 65 200 medical devices. We also initiated and help run 8 medical initiatives and one...

How Much Did the Great Orchestra of Christmas Charity Raise Throughout the Years?

Our charity has been fundraising for almost 30 years. In the 29 years of our activity, we managed to raise an impressive sum of over PLN 1.5 billion! Let's see how the fundraiser progressed from the very beginning of our work up to the new, record-setting result of the 2...

The Great Orchestra of Christmas Charity Foundation, which is the biggest NGO in Poland, raised PLN 210 813 830,10 ( EUR  45 993 068,79). Money will go towards the purchase of medical equipment for children's ENT wards in public hospitals nationwide.