A band which is built on authenticity and committed to social involvement is now confirmed to play at Pol'and'Rock Festival 2021, which is a non-commercial event. When we announced the band nearly a year ago to the day, the response from fans was incredible and we are pleased to confirm that Dropkick Murphys will perform at the upcoming edition of our festival.

Established in 1996 in southern suburbs of Boston by bassist Ken Casey, the outfit combines hardcore punk with Celtic folk music. Dropkick Murphys merge hardcore, which is faster-paced, harder, and more aggressive than other forms of punk rock with Irish folk tunes. Traditional Celtic folk instruments such as bodhran, tin whistle, and bagpipes join electric guitars and percussion in their high-energy, high-power live performances. Dropkick Murphys take the traditional sea shanties to the next level, turning them into fighting anthems for generations of music fans across the world. One of their best-known songs, the fast-paced 'I'm Shipping Up To Boston' was featured in Oscar-winning Scorsese film, The Departed.
The band released nine studio albums, with four most recent LPs released through their own independent label. The band released two singles just in time for the holidays - one is a cover of a well-loved standard 'Christmas (Baby Please Come Home)' and original single, alongside a lyric video for ' I Wish You Were Here'. Since their gigs at local pubs, the band has played over 5 000 shows, performing at major European festivals such as Download, Hellfest Open Air, and Rock am Ring.
Even though their high-voltage performances are in demand across the world, Dropkick Murphys always make sure to appear during shows celebrating the St Patrick's day in Boston. The band's lasting success can be attributed to their authenticity and integrity.  Their 1998 debut LP Do or Die set the band's intentions loud and clear. Dropkick Murphys never strayed from their course - they are proud of their community, proud of their Irish heritage and committed to supporting causes they believe in. 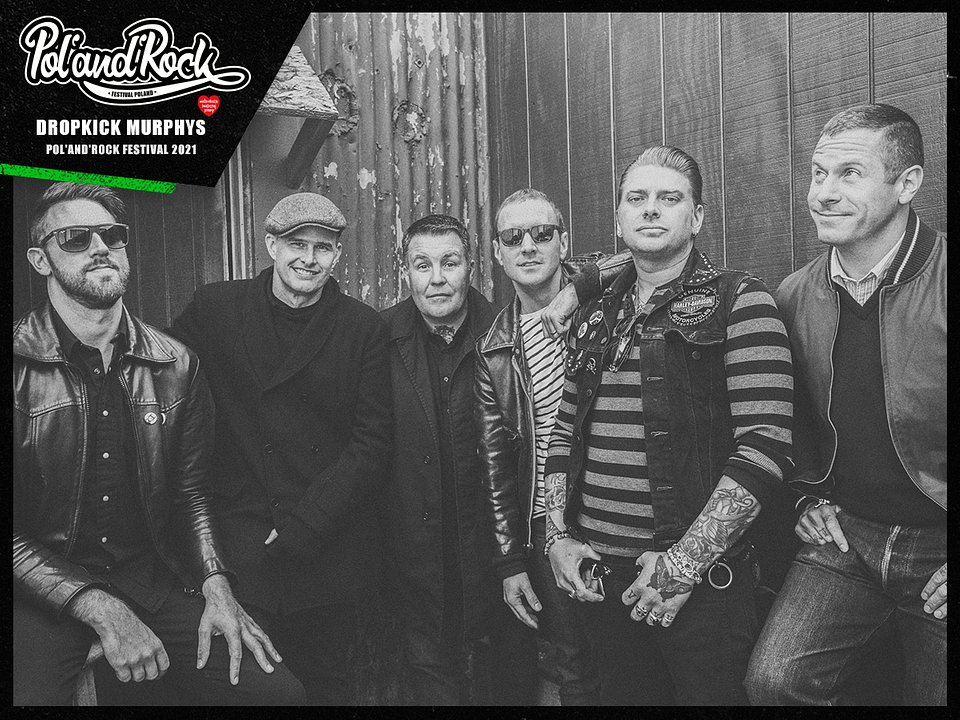 Rooted in the tradition of working-class Bostonian ethos, the band champions labour union causes. Musicians never shy away from making a political statement, and they put their money where their mouths are. Dropkick Murphys support different worthy causes. The band has teamed up with children's cancer research charity, holds benefit concerts for war veterans, and donated all money from the sales of their charity EP, which featured Bruce Springsteen vocals on a re-recorded single Rose Tattoo, to the victims of Boston Marathon bombing. The Claddagh Fund established by Casey aims to support the community-based non-profits focusing on children's welfare, veteran organizations, and alcohol and drug rehabilitation programmes. In 2016 the band received the Robert F. Kennedy's Children's Action Corps award for their long-time commitment to charity work.
A band which is built on authenticity and committed to social involvement is a suiting first act to be confirmed by Pol'and'Rock Festival 2021, which is a non-commercial event.

Fresh after their well-deserved win at the Golden God awards for Best British Band, Judas Priest is confirmed to play at the non-commercial Pol'and'Rock Festival.

Fresh off the release of their second album, Modern Ruin, the hardcore punk band toured across Europe. In Agust, they will take the Main Stage at the Polish festival.